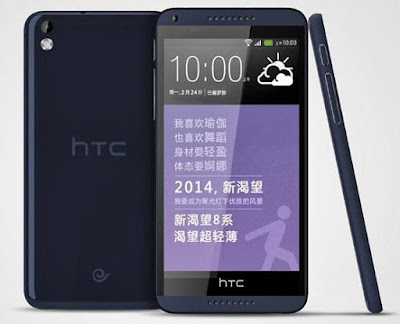 HTC has introduced a new product in the market that is some way between the sizes of a phone and a tablet. They worked on this ideology “Bigger is better!” It can even fit the pockets! So, introducing a 2 in 1 device has the benefits of a large screen plus the benefits of being able to be transported with complete ease. This device actually targets the video maniacs in the market, who want to watch stuff like videos, films, dramas and other stuff which would be annoying to see on a small screen. Looking down at its features.

Design:
It has a structure that is neither too serious that means business nor it is too funky that it cannot be bought by business men. Its unique design makes it available to be bought by all kinds of users as the design is a general one.

Hardware:
It has a quad-core 1.9 GHz Snapdragon 600 processor, a 2 GB RAM and a 16 GB internal storage memory. It has a 5 inch HD screen display that is the normal length in the line of the phablets in the technology world. It is actually an update to HTC Butterfly that was launched last year. Its memory can also be expanded by inserting a micro SD card of up to 64 GB in the SD card slot.

HTC Butterfly S has an HD 1080p display that is boomed up by sound stereo speakers embedded at the front. These features are given more sunshine with the availability of FM radio and an HTC 4 MP Ultra Pixel Camera with HTC Zoe and Video Highlights. This gives a result that has 300 percent more light than a normal smart phone camera sensor. It also has a front facing camera of 2.1 mega pixels and its battery is known to be the most long-lasting and of highest capacity than in any of the HTC phones. It has a Super LCD3 touch screen that makes exploring and usage of the cell phone comfortable. It also comes with Wi fi support and Bluetooth facility.

Software:
It has the latest Android OS Jelly Bean which provides its customers full ease of exploring their phablet. HTC has joined hands with Drop Box to provide the customers the facilities of the cloud storage services so that the users can save memory on their phablets.

Future:
This kind of a device is a good shot by HTC and it planned to attract the customers that are tight on budget and have a limited choice of carrying stuff around with them as taking a smart phone and a tab along with you all the time is tiring plus both of these devices need extra attention for their security purposes. On the other hand, it will attract people who want to enjoy the benefits of both a smart phone and a table but they are low on budget and so they go for 2 in 1 kind of stuff that is now available to them.

Really a nice stuff,the images shown are rare one and not found in other webpages. keep sharing such a relevant content. Greatful to find useful content like Infoshutter knowledge portal.