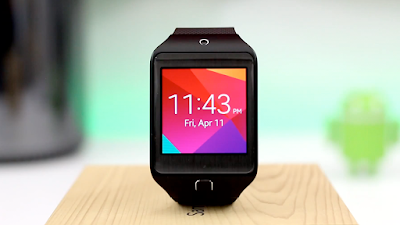 After its Samsung Gear 2 Smartwatch, there is yet another smart version of this device, the Samsung Gear 2 Neo Smartwatch. It would not be wrong to say that it is the sibling of its former model and there are only minor differences between the two.

The Samsung Gear 2 Neo Smartwatch is just the same in looks and numerous other characteristics to its predecessor and the only difference is that the Neo does not have a camera and it has been introduced in a plastic body and is cheaper than the former model. While the biggest challenge of price has been overcome by the manufacturer, yet there are many threats to the model as many consumers these days find it hard to work with a device which is not equipped with a camera and when the competing companies are offering devices with cameras, it can become a big challenge to remain in the market and do well.

Samsung Gear 2 Neo Smartwatch is in a much better shape that the models that came before it and the developers have worked hard on making the technology behind the device operate much fasters and in a good way too. For instance, there are some really cool apps that are working checking out and Flesky tops the list. This app lets the user’s type and send messages without taking out the phone or using other means by just using the Gear. Even though typing in not easy on the same screen, yet the unique error correction system on the gadget is just superb.

There are also other great innovations by developers and converter+ is one of them as it makes the most common conversions like distance, weight, cooking and much more so simply and comfortable. The Smart IR Remote offers advanced TV remote features that Samsung's other models have missed and Radar Watch shows users the latest Doppler radar map of their area without opening any other device or using any other technology.

Samsung has been making full use of the technology that has been provided by android and it has been active in all its models but with Samsung Gear 2 Neo Smartwatch, it has outdone itself in the regard that it has much better voice input and can integrate with other android smartphone apps very smartly. When we talk about the physical appearance, it should be remembered that Samsung Gear 2 Neo Smartwatch has plastic body and it is no simple or ordinary plastic but very solid and rubbery-feeling plastic and for people who might consider it something bad, it is more durable and less prone to scratches as compared to stainless steel or other materials which show signs of wear and tear.

Another great feature about Samsung Gear 2 Neo Smartwatch is its water resistance and it can soak in 1 m (3.3 ft) of water for 30 minutes and keep on ticking which must have been a big challenge for developers to work out. All these features make this smartwatch a great product and this is the main reason that not only students but also writers who work for dissertation and assignment writing service provider companies prefer buying it as it serves them most brilliantly.