Difference between Analog and Digital 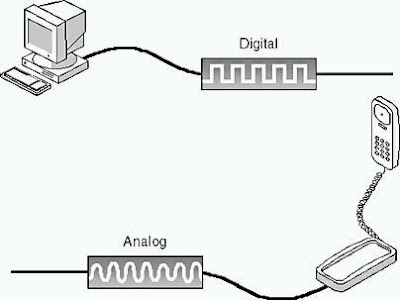 Analog and Digital
As a technology, analog is the process of taking an audio or video signal (the human voice) and translating it into electronic pulses. Digital on the other hand is breaking the signal into a binary format where the audio or video data is represented by a series of "1"s and "0"s. Simple enough when it's the device analog or digital phone, fax, modem, or likewise that does all the converting for you.

Digital versus analog can refer to method of input, data storage and transfer, the internal working of an instrument, and the kind of display. The word comes from the same source as the word digit and digit us.

The digital technology breaks your voice (or television) signal into binary code a series of 1s and 0s transfers it to the other end where another device (phone, modem or TV) takes all the numbers and reassembles them into the original signal. The beauty of digital is that it knows what it should be when it reaches the end of the transmission. That way, it can correct any errors that may have occurred in the data transfer. What does all that mean to you? Clarity? In most cases, you'll get distortion-free conversations and clearer TV pictures. The nature of digital technology allows it to cram lots of those 1s and 0s together into the same space an analog signal uses. Like your button-rich phone at work or your 200-plus digital cable service, that means more features can be crammed into the digital signal. Digital offers better clarity, but analog gives you richer quality. Digital like the VCR or the CD is coming down in cost and coming out in everything from cell phones to satellite dishes.

Analog lines also referred to as POTS (Plain Old Telephone Service), support standard phones, fax machines, and modems. These are the lines typically found in your home or small office

There are digital-to-analog adapters that not only let you use analog equipment in a digital environment, but also safeguard against frying the internal circuitry of your phone, fax, modem, or laptop.

Cordless phone:
The very nature of digital technology breaking a signal into binary code and recreating it on the receiving end gives you clear, distortion-free cordless calls.

Cordless phones with digital technology are also able to encrypt all those 1s and 0s during transmission so your conversation is safe from eavesdroppers. Plus, more power can be applied to digital signals and thus, you'll enjoy longer range on your cordless phone conversations.

What is the advantage to analog cordless products? Well, they're a bit cheaper. And the sound quality is richer. So unless you need digital security, why not save a few bucks and goes with an analog phone? After all, in home or small office environments where you may be the only cordless user, you won't have any interference issues.

Keep in mind, when talking about digital and analog cordless phones; you're talking about the signals being transferred between the handset and its base. The phones themselves are still analog devices that can only be used on analog lines. Also, the range of your cordless phone analog or digital will always depend on the environment.

Cellular Phones
Perhaps the most effective use of the digital versus analog technology is in the booming cellular market. With new phone activations increasing exponentially, the limits of analog are quickly being realized.

Digital cellular lets significantly more people use their phones within a single coverage area. More data can be sent and received simultaneously by each phone user. Plus, transmissions are more resistant to static and signal fading. And with the all-in-one phones out now phone, pager, voice mail, internet access digital phones offer more features than their analog predecessors.

Analog's sound quality is still superior as some users with dual-transmission phones will manually switch to analog for better sound when they're not concerned with a crowded coverage area but digital is quickly becoming the norm in the cellular market.

Better Sound Quality
Digital offers a better quality of sound. Proponents of digital claimed too that because digital scrambled up the signals into bursts, it was more secure than analog and can help thwart "cloning," an act of grabbing phone account information over the air in order to copy then resell that information for piracy purposes. By some industry estimates, close to $650 million in wireless services has been coveted by these big-eared crooks, which only adds onto the operator's bottom line a cost that is eventually passed on to the customer. Digital has stronger battery life than analog, and for the most part, better, more modern features on the phones.

thanks for posting this article. the information will save me money around the office as equipment replacement is costly and time consuming... time is money & etc. Keep me on your update list